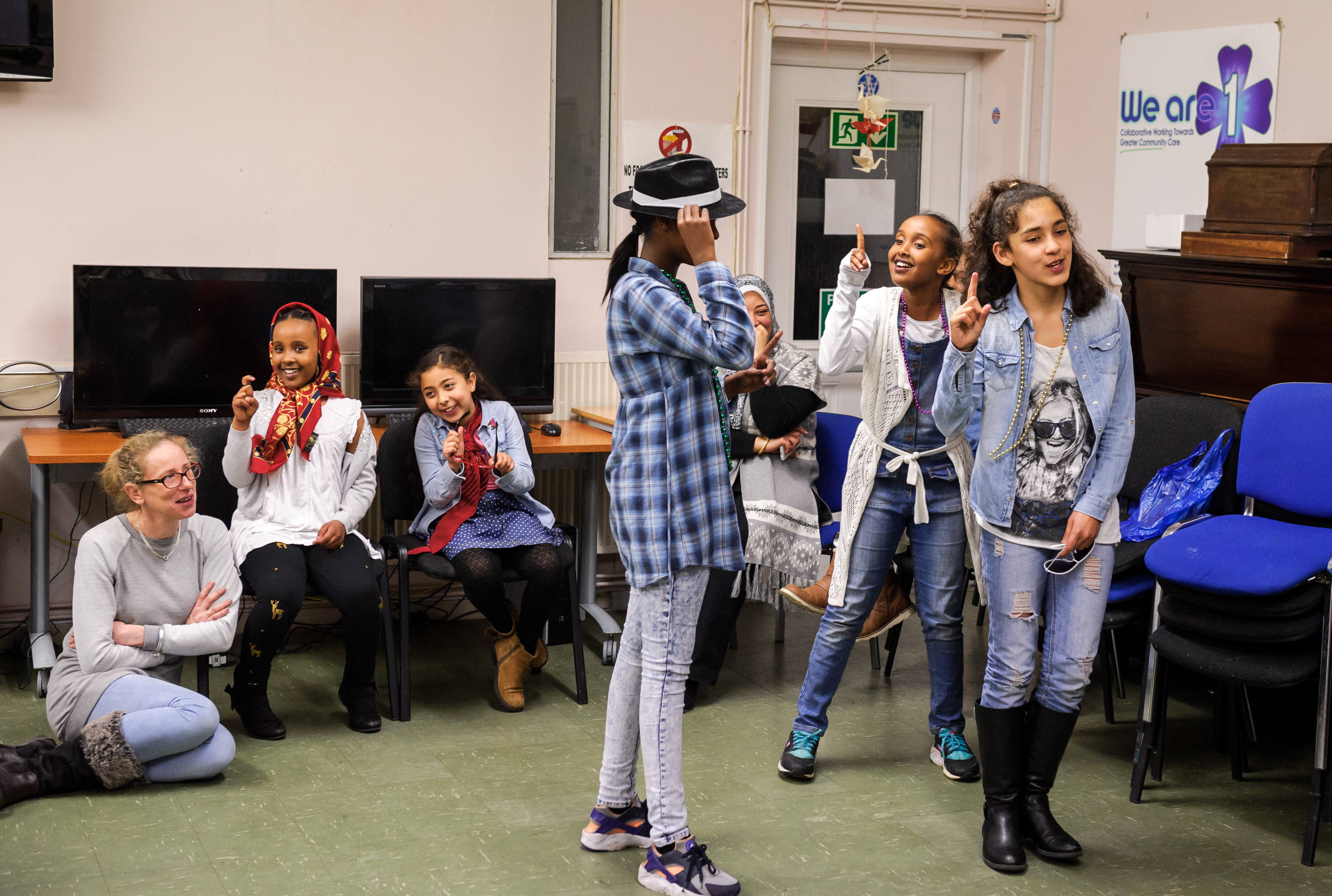 I felt a lot more confident when I came here, and I found that I'm a lot more stronger…

Drop in Drama is a series of regular drama workshops for families to participate in together. The workshops are delivered by Tale Be Told Theatre Company and take place on the Benson and Estridge estate in Hounslow Central, where there are higher than average levels of English spoken nas a second language.

The aim of the Drop In Drama project was to offer the chance for people to enjoy arts activities on a Hounslow Central estate where there are limited opportunities to take part in the arts.

The project was initiated by the Hounslow Central Local Advisory Group (LAG), a community group that come together to influence and shape the Creative People and Places Hounslow programme, identifying the arts needs in the area. The group decided to try drama as the primary artform because they understood that drama could help break down language barriers of the communities in the area and improve confidence amongst participants.

The project was aimed at families for two reasons: to encourage families to work together with the same shared goals; and to reach adults, particularly women, who, for cultural reasons, may not access activities without their children. Target participants were families from the Benson and Estridge estate, an estate in Hounslow Central which is known for higher than average BAME population and speakers of English as a second language, as well as lower disposable income.

The London Borough of Hounslow was a partner in the project and offered a bursary for some of the estate residents to participate in the activity for free. After the success of the first term they offered to cover 50% of the costs for whole project.

Tale Be Told Theatre Company, a Creative People and Places Hounslow Company Development Awardee – an emerging company that is being supported financially and through mentorship and business planning by CPP Hounslow – delivered the project.

One challenge the project faced in term one was the number of languages within the room – by term two this was addressed by delivering an initial session that included learning ‘Hello’ in various languages, by planning and delivering activities that were less verbal in their delivery and execution and by taking feedback from participants through a smiley face system rather than using words.

What was the impact of the project?

The demographic of the group included a majority of female adults with a mix of male and female children, approximately 80% unemployed people as well as approximately 5% White British. Nine languages were spoken across the group.

CPP Hounslow’s larger projects reach incredibly diverse audiences. With Drop In Drama there was a mission to target a particularly diverse group with a small-scale project and this has been successful.

The majority of participants rated every session as ‘Very good’ with all others rating them as ‘Good’. When asked to describe the sessions in one word the group responded “The best ever”, “This club makes my day!” and “Takes my breath away”.

Some of the parents described what they were taking away from the session and it included “I liked that I joined in with my children, I’m really shy!”  and “[I will take home] a smile for my husband”.

When asked, ‘Have you learnt anything new about yourself?’ – adult participants responded “I have more imagination… I didn’t know I could actually…sometimes I’m always shy, but when I first came here I felt like, a lot more confident…” and “I felt a lot more confident when I came here, and I found that I’m a lot more stronger…”.

Audiences that came to see the final performance were really impressed using words like “Epic” and “Amazing”.

An overarching CPP Hounslow priority that every one of our projects aims to address is for community members to take the lead in creating artistic opportunities for their area. When parents were asked if the would like to play a greater part in organising the Drop In Drama sessions four parents identified themselves as willing and interested to do that.

Another demonstration of a positive impact is that the London Borough of Hounslow were excited by the results of the project in term one and committed 50% of the costs for term two. In addition the borough has used the Drop in Drama model to develop their own sessions in other estates across Hounslow.

This website uses cookies to improve your experience while you navigate through the website. Out of these cookies, the cookies that are categorized as necessary are stored on your browser as they are essential for the working of basic functionalities of the website. We also use third-party cookies that help us analyze and understand how you use this website. These cookies will be stored in your browser only with your consent. You also have the option to opt-out of these cookies. But opting out of some of these cookies may have an effect on your browsing experience.
Necessary Always Enabled
Necessary cookies are absolutely essential for the website to function properly. This category only includes cookies that ensures basic functionalities and security features of the website. These cookies do not store any personal information.
Analytics
Analytical cookies are used to understand how visitors interact with the website. These cookies help provide information on metrics the number of visitors, bounce rate, traffic source, etc.
Performance
Performance cookies are used to understand and analyze the key performance indexes of the website which helps in delivering a better user experience for the visitors.
Advertisement
Advertisement cookies are used to provide visitors with relevant ads and marketing campaigns. These cookies track visitors across websites and collect information to provide customized ads.
Uncategorized
Undefined cookies are those that are being analyzed and have not been classified into a category as yet.
Save & Accept